Why Breakfast Is The Most Important Meal Of Day

Insulin carries glucose to cells. After you eat food, the pancreas will send insulin into the blood to grab glucose and escort the glucose into cells. If you don’t eat food, then there’s no insulin kick. And when you don’t eat for long periods, blood sugar can get too low. This is when the cortisol (adrenalin!) hormone steps in—to balance blood sugar.

Proven. Breakfast is the most important meal of the day—because the insulin kick causes your stress glands to stop pushing cortisol. Let me explain.

You know of cortisol (adrenaline!) as your fight or flight hormone. So when you see a tiger, you fight or flee.

But no matter how important the fight or flight instinct is, cortisol discreetly helps in another key way. Behind the scenes.  Now before I reveal cortisol’s hidden agenda, let me quickly introduce one additional character to this plot.  Insulin.  If we ignore the insulin hormone, then this narrative becomes a moot point.

Many are familiar with the role insulin plays. Especially, diabetics.

Insulin is a hormone.  It binds to glucose (sugar!) molecules in blood, so the glucose can be used by your cells. Insulin is secreted by the beta cells of the pancreas when there’s glucose present in the bloodstream. Especially, after we eat.

Again, the purpose of the insulin hormone is to guide glucose molecule entry into your liver, muscle and cells.  Insulin carries glucose to cells.

So step one is: we eat food. Step two is: the food gets digested. Step three is: insulin metabolizes carbohydrates into your cells (the fancy name for step three is called chemotaxis).

Now, imagine a teeter totter. Yes, the one you sat on as a kid. You on one end; and your friend on the other end.  As you push yourself off the ground, you start to rise. While your friend in the opposite seat simultaneously falls.

Back and forth, up and down. The teeter totter goes.

Insulin and cortisol similarly act counter to each other.

Cortisol and insulin each sit on opposite sides of the teeter totter. When one goes up; the other responds and goes down (assuming you’re sleeping properly).

So let’s get back to cortisol. What’s so special about cortisol other than that fight or flight?

Answer: cortisol mobilizes stored energy when in a state of starvation.

In other words, cortisol moves stored sugar in the opposite direction of insulin.  Cortisol brings glucose back into the bloodstream. (the fancy name for this is gluconeogenesis).

For example, if you were stranded in the desert for days, then you might start to starve.  Without food intake—especially quality carbohydrates—your blood sugar would get too low. This is called hypoglycemia. If you were to get too hypoglycemic, you’ll die.

This is where cortisol steps in.

The adrenal glands produce cortisol. For the fact blood sugar is low.

Cortisol will then mobilize the energy stored in liver, muscle and fat. The goal? To balance blood sugar, of course.

The human body will sacrifice almost any bodily function for the sake of safely balancing blood sugar—just ask any diabetic.

And this balancing act continues while you sleep.

It’s morning food that turns this cortisol signal off.

If you were to look at a normal cortisol curve, you would find it’s higher in the morning—and gradually declines throughout the day.

And insulin should be low in the morning, until you eat.

Example: here’s my personal functional adrenal stress profile from March 2008. I tested saliva to measure my adrenals. Notice the results: my cortisol levels are outside of normal range: not good. I had developed little red rashes across my back and stomach a couple years prior.  So I had allergy, saliva and nutrition tested in an attempt to find the culprit for the draping skin rashes.  (the blue line is my levels) 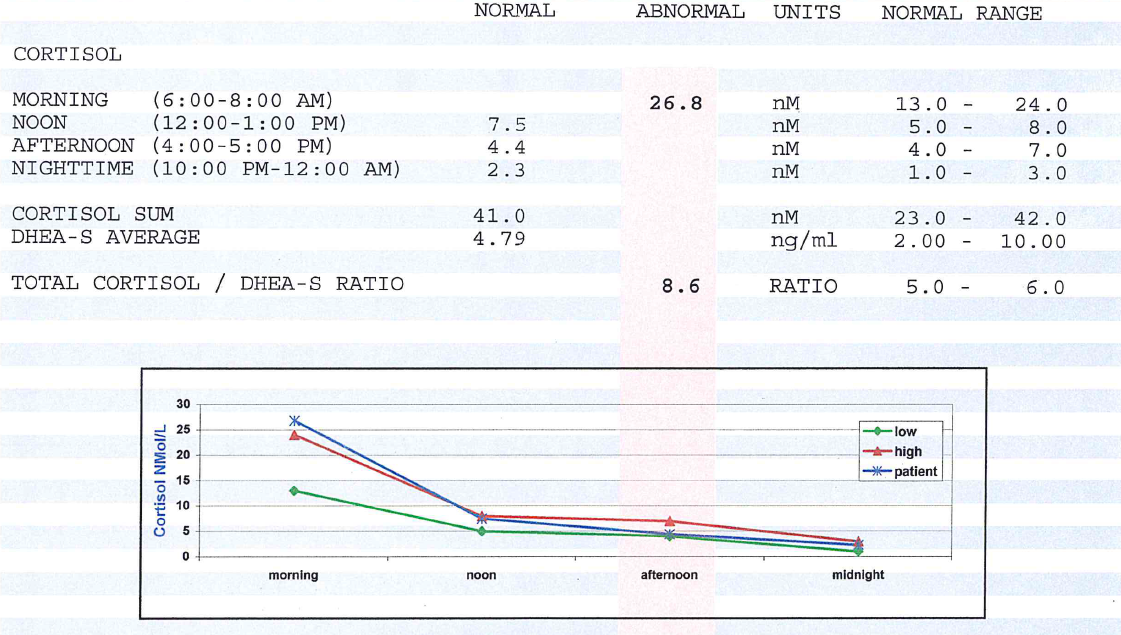 SIDE NOTE:  sleep is a key factor. If you don’t sleep in the dark; or if you stay up late hours with the lights on, then insulin will stay higher during the dark hours, when it should be flat.  To learn the hormone balancing dynamics of proper sleep, feel free to read the book Lights Out.

If cortisol secretion continues for too long, you could suffer from adrenal burnout. This is not good.

Not only that, because continual cortisol sucks glucose back into the bloodstream, it can confuse insulin to re-appear. This flawed signaling can contribute to a downline phenomenon called insulin resistance.

So what’s the solution?

Upon eating quality food after a good night’s sleep, the beta cells of the pancreas start secreting insulin. Then the teeter totter effect smoothly starts to settle in. As cortisol recognizes insulin’s response to food, the adrenal glands gradually reduce pumping cortisol.

At last, the adrenal (cortisol) glands can relax.

How about diets which suggest speedy weight loss by not eating before morning exercises? Will you lose weigh?  Initially, yes. Might you instead suffer a heart-attack amidst the adrenal torture it causes? That’s a possibility, indeed.

Skipping breakfast is an extremely dangerous approach to life. Eat breakfast to balance your blood sugar first. Even a banana: or toasted bread: or yogurt: or real fruit smoothie. Your adrenal glands will thank you for the fresh dose of natural insulin.

If you miss breakfast and start experiencing headaches, it may be due to a chemical imbalance caused by an overworked adrenal gland. Sharp knife-like pain in the middle of your gut from unknown origin? High likelihood it’s your adrenal glands hitting overload limits. Ever had a hunger pain from not eating? Adrenal glands are talking.

If you’re drinking coffee, exercising, using stimulant drugs or on a high protein diet while in the presence of adrenal fatigue, then the end result could be quite painful.

Get a full night’s sleep—in the dark. Eat quality food for breakfast. Your body and brain depend on it.

How Precise Is Precision Medicine In The Fight Against Cancer? 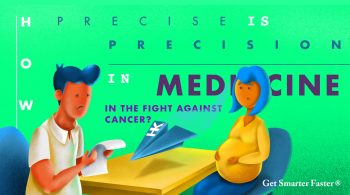 How Precise Is Precision Medicine In The Fight Against Cancer?